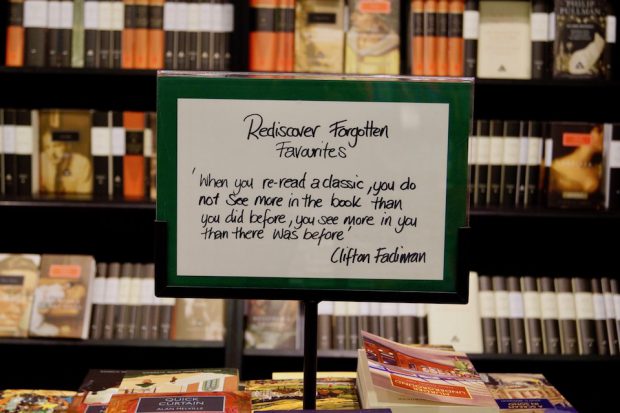 London is Europe’s melting pot. It’s the place where fashion people meet, the cool kids and the hip ones. But there is also the other London. The London, which once wrote and printed. I am going on a time travel back to the places, which have been the hot spots of literature and writers. 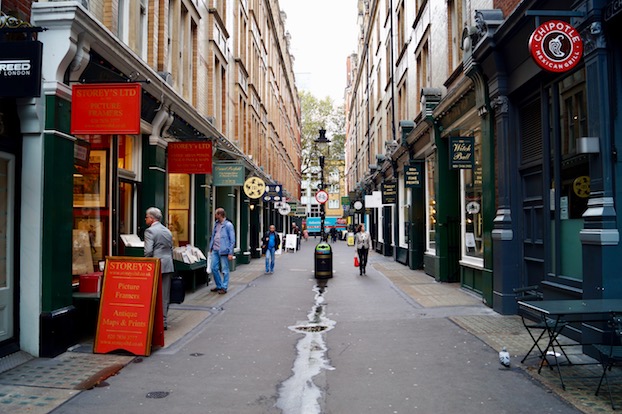 “It was the best of times, it was the worst of times.” – Charles Dickens

With Dickens’ words in mind, I down the last sip of my pint. Did he ever sit here? Maybe one day? To think about the good and the bad times? Nobody knows. But yet, back in 1859 Dickens already mentioned the name of this dusty old and dark pub in one of his novels, “A Tale of Two Cities”: “Pillars of Hercules”. The same pub that I am currently sitting in, sipping on an ice-cold beer, surrounded by older business men that meet for their usual evening chats with friends. They come here to watch football on one of the two screens or to simply think about the good old times, while comfortably sitting in the rusty and worn-out red leather couches and letting the day pass by. I like the atmosphere. It has something unique. Something, that only pubs can have. Still, this one here is special . The mumbling of the men that provides the perfect background sound and shoots me back into the day, when Dickens probably sat in the same old red leather couch, sipping on a pint. Back then, when writers came here to write, when authors came here to search for new inspiration and when the air was filled the smoke and whisky. Today, there is neither smoke, nor writers. Solely the smell of whisky is still there: securely stored in the carpets, that have probably been here even before Dickens set the first step into the pub.

Every single trip represents a time travel. There is not a single city, country or destination, where you won’t ask yourself the question how this place has actually looked like, smelled, felt earlier – when there were less travellers.

Whether it is the cafés that became the home of Flat Whites and Skinny Lattes, the restaurants, that offer more vegan and vegetarian meals than traditional ones or whether it is the many shops and malls, that all follow the same unisex look. It is the flu of coolness, which hops from city to city, from country to country, affecting everything that it is passing along the way. Even the people – from Sydney over Paris and London to Tokyo – all look the same. And that makes it even more vital to actually raise the question about the earlier, the before. 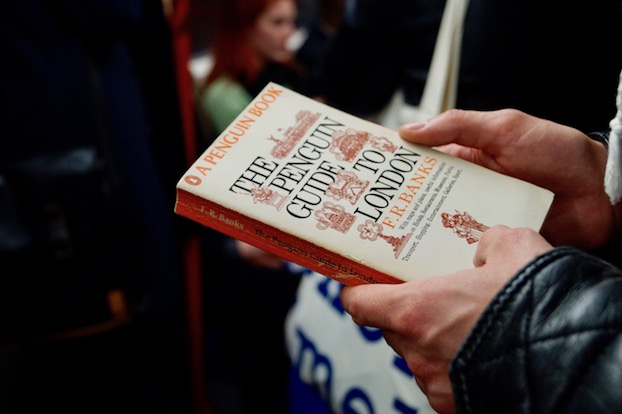 I am on a time travel back to the century of the literary London. The London, that has been existent before smartphones, tablets and bloggers. The London, that existed of prestigious clubs, smokey cafés and printers, that were constantly on the run. 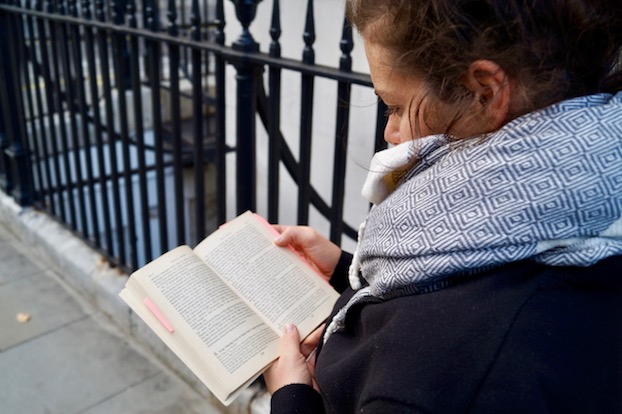 „The secret of getting ahead, is getting started“ – Agatha Christie

Kensington is only a short walk off the hustle and the bustle on the busy streets of London. It is a small city within the big city possessing a little bit of a US-suburbian-flair. The streets are clean and made of cobble stones and the houses are decorated with colourful flower bouquets on terraces and balconies. Kensington has once been the place to be for artists, writers and every one else who had the creative spin in the body – and it still is. 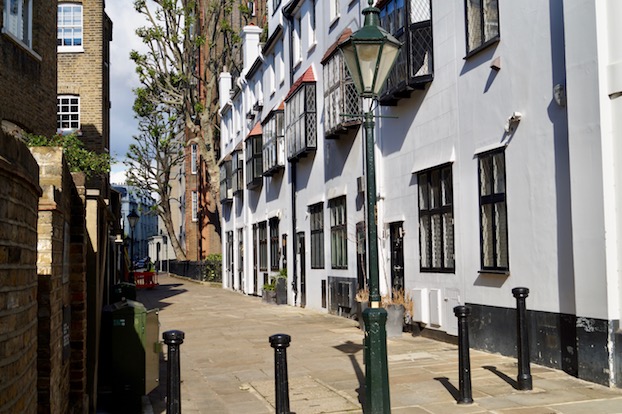 While wandering down the cute cobble stone alleys, creativity can be felt on every corner and in every café, where people start their morning with a strong black café and a good old book before they head over to their gallery – where they do the same thing, potentially. Zig-zagging through the streets of Kensington, history can be felt. The “Blue Plaques”, which were put on different houses remember of the artists and writers, that have once lived here. 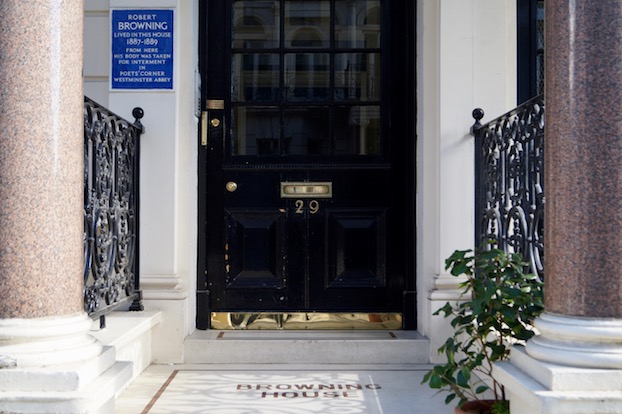 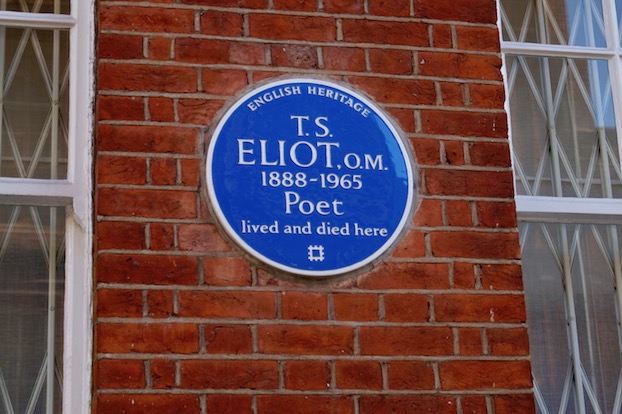 Passing the houses of James Joyce, TS Eliot, Agatha Christie and Siegfried Sassoon, it feels as if one of them would step out on the porch in the next moment. I can still smell the cigarette smoke through the door, that has once filled the air of oh so many writers’ houses. 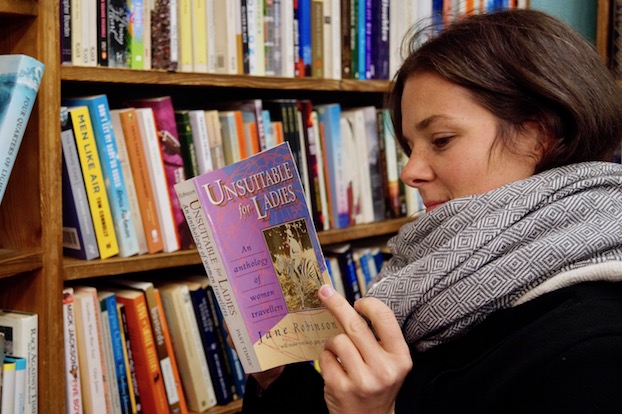 The livelier side of the literary London can be found on Charing Cross Road. For book-lovers – this is the literary heart of Britain’s capital. No wonder: one book shop is neatly right to the next one, leaving little space of a few millimetres between them. Some of them look as if they have been through at least half of the world’s history. As if they have seen a lot, experienced a lot. They are those shops, in which the tops of your fingers turn dusty black from the book you are looking through. They are also those shops, that have thousands of books in their shelves. That many, that nobody can actually find anything. And that many, that even the shop owner rarely looks up from his book to help customers find what they are looking for. But you don’t come here to look for something precise. 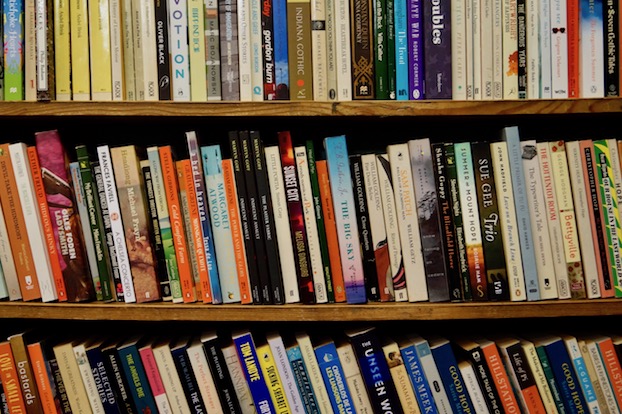 You come here to delve. Delve back into the times where good writing has been securely put into a thick leather envelope. Where good writing had thousands of pages and more. Those shops are made to travel back in time, to find little treasures, that cheer up, to be reminded of the good old times and to tickle your emotions. Books, the easiest way to escape the daily routine. 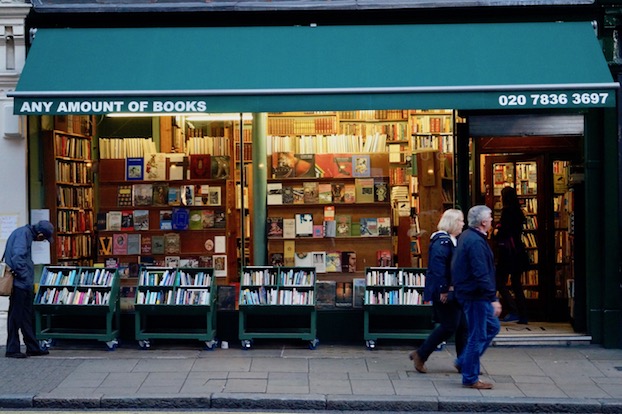 In the very beginning, the front end, of Charing Cross Road the bookshop “Any Amount of Books” is located. A bookshop, that has just acquired the entire library of producer, author and actor Bryan Forbes. A bookshop, that has 6.5 kilometres of book shelves filled with books from centuries ago – Just the beginning of the book marathon that lies ahead of every visitor in Charing Cross Road.

Especially during 7pm, Charing Cross Road turns into a busy street of students, workers and other book lovers, that came here to stroll through the old and dusty books. They walk up and down the street, in and our the shops – like busy bees, that could have been once seen on London’s Fleet Streets during the exact time.

“Especially in the evening Fleet Street is packed with people. This is the time when the media houses print their papers, so that the Londoners can read the news on their way to work in the morning. Registers at the media houses to see what is happening here at night, but do that early in advance”

This is what it says in my Penguin Guide to London from 1965. Holding the book in my hand, I am standing right in Fleet Street. The street that has been the famous street of newspapers, magazines and printing houses is dead. It’s 8 pm and I am the only one walking around here. From time to time a red double-decker bus is passing by, and so do the black cabs. 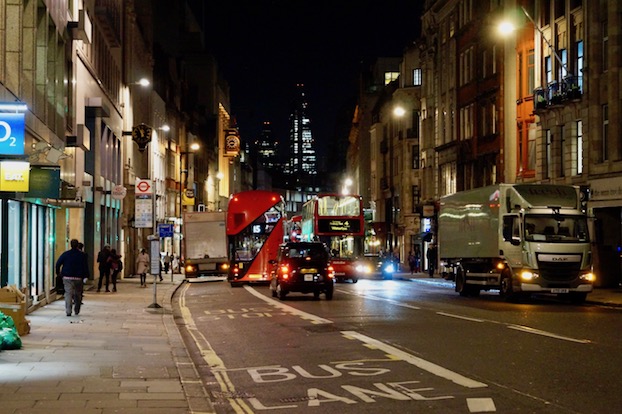 It’s quiet. A silence, that is rare in London and a silence, which is nice for an evening walk. Fleet Street is filled with new building – shiny and big and the house of consultancy companies. Printing? Nothing, that can be found here anymore. Sadly. 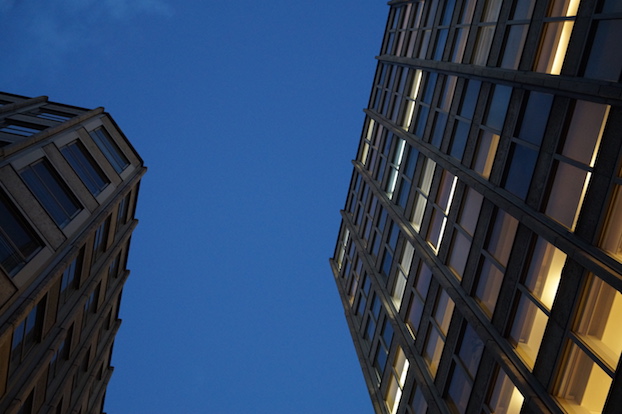 I am still searching for the feeling of back in the times, when the streets were full of journalists walking from news agency to news agency, when newspapers were printed throughout the whole night and when last articles were revised before dust. A little bit of that can be found in Pall Mall Street. I am taking the bus straight to Economist Plaza – home to the popular magazine. This is it, where journalists sit, just like years ago, and write their articles and reportages. The building reminds me of the sixties: square windows, slightly yellow touches on the façade. But Economist Plaza is nothing but yet another quiet square. Security guards have chats at the entrance to the agency and from time to time, last workers leave the house – ready for their night. Printing? Not happening here – and if so, it happens behind closed doors. 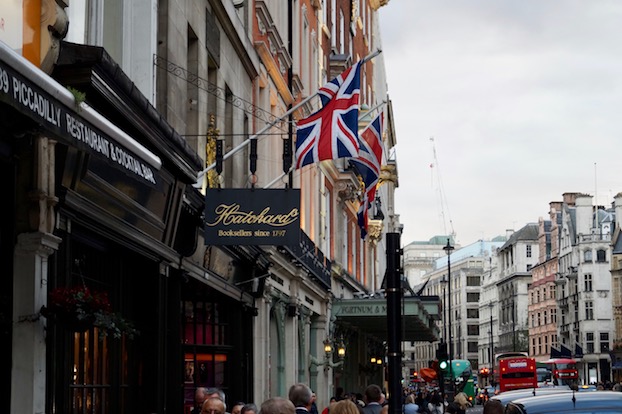 Only few traces of literary London can still be found in the city and it can only be experienced if the own imagination is that strong to dive into every single line of the Penguin Travel Guide from 1965. The lines, in which London has been described as something special. As a city, that smells of whisky and cigarettes. A smell that, today, can only be found in prestigious club like the Athenaeum, second home of the upper upper class that comes here to dream away and right into the good old times and to write, read and drink whisky.

Just like me, at Dickens spot in “The Pillars of Hercules” in Soho, London’s centre of hip, trends and oh-so-cool shops.

This story has been realised in cooperation with Abe Books. Thanks for that!

0
Staying in Hostels: This is what you should take
Travel Bucket List 2018: What comes next?!