Holidays in India: A trip to Kerala 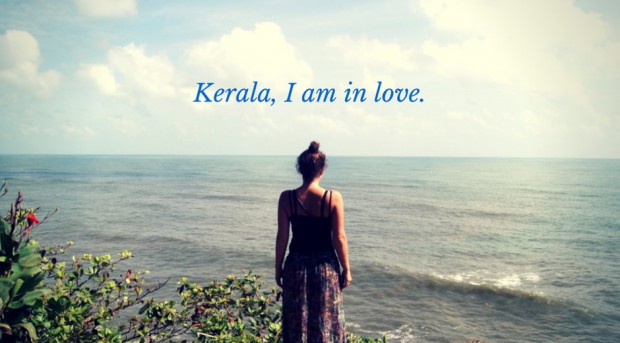 The plane lands and I feel something foreign in my nose, in my bronchia and in my lungs: fresh air. We already spent 1,5 weeks in India and have another 10 days lying ahead of us, which just started perfectly: we landed in “god’s own country”, or the “country of coconuts”, how Kerala is often called. I stick to the country of coconuts, since this clearly fits the best.

A trip to Kerala: The quickest India in the world

But let’s go back to the very beginning. Today, around 4, we were still in Goa, a place that has never made it onto my top list of places that need to be visited. At 4 in the morning our driver is standing in front of our hotel in Anjuna, Goa. He took us to the airport in Goa from which we took, or intended to take, Air India via Bangalore to Kochi in Kerala, located in the Southwest of India. Intended to. One hour passes, two hours pass and nobody knows what is happening. The Indians that fly a lot blame the airline, shake their heads and yell “Always the same!”. After about 3 hours we finally went to Bangalore, where we were welcomed by a little, excited and sweaty airport employee who has been waiting for us for a while and now runs with us through the entire airport building. “No time, miss, no time!” – we are too late, but the plane is waiting for us while our luggage circles around on the luggage belt. The little Indian is sweating, we are laughing and the stewardesses are red of pure anger. 10 minutes later we are sitting on the plane to Kochi, picked up our luggage, checked in again and passed 5 different security controls until we got our new boarding passes. Who thought that India can be that quickly if it wants to be? 1,5 hours later we arrive in Kerala, the country of coconut palms. 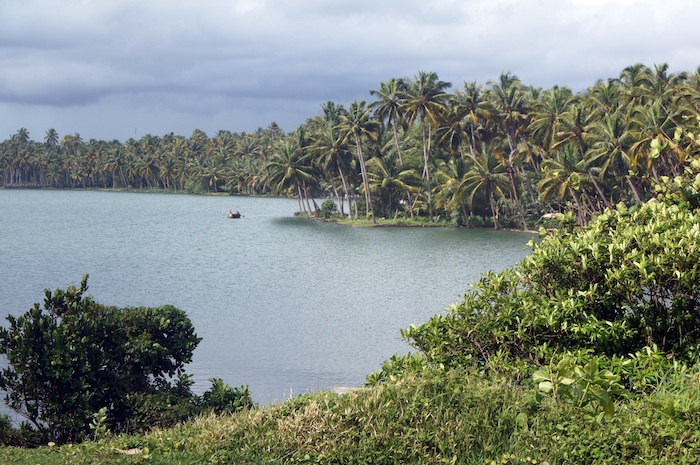 After long discussions at the airport we are finally sitting in the taxi to Varkala – a wonderful place, that I never imagined to be that beautiful. Varkala is directly located at the cliff and I think this is the new Goa: backpackers meet in Varkala and party, relax and have an awesome time together. Varkala pretty much consists of one street with market stalls, which leads from one beach to the other. Despite the fact that hearing “Come see my shop” for about 10 times a day does annoy you at some point, this place boasts some magic that I, so far, have only found in Bali. 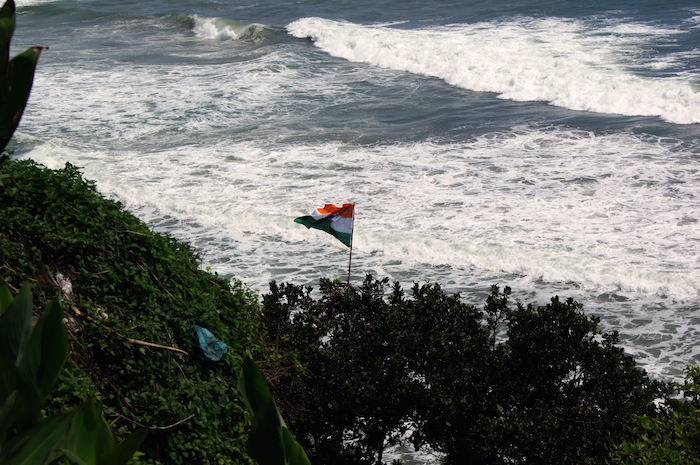 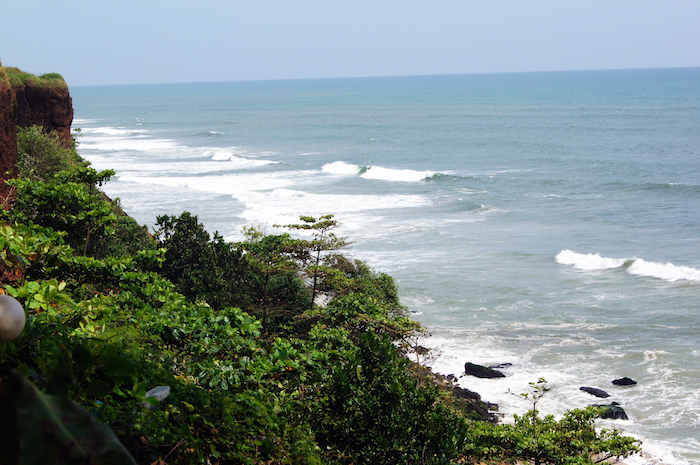 A trip to Kerala: Papanasham Beach

The beach that is located on the left side of Varkalas market street is not only the perfect place to watch the sunset, but also the place where locals come to give offerings to their ancestors. We are coming here for dawn and find topless priests with painted faces, who just open up their stalls and wait for the locals to come and make offerings. At the same time, at least this is what we think, we see an Indian family who just discovers the beauty of the ocean, while two other young Indians rock the waves with their canoe. Oh India, you crazy little thing. 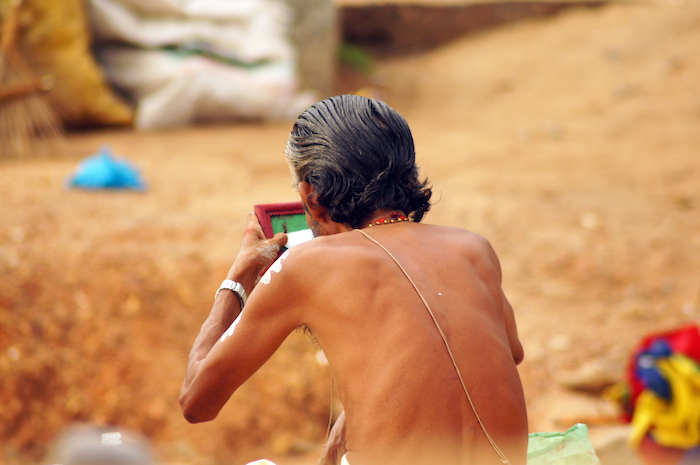 A trip to Kerala: About fresh fish and real coffee

It is known to almost all India travellers. It simply comes and gets into your veins where it stays for about 1 to 2 weeks – the disgust towards curry and everything that tastes like curry. At some point we are just sick of dipping naan bread into curry-like sauce, which is why we were even more amazed when we arrived in Kerala and saw what the culinary side had to offer: proper coffee, carrot cake, and things that, once smelling them, we really missed before. 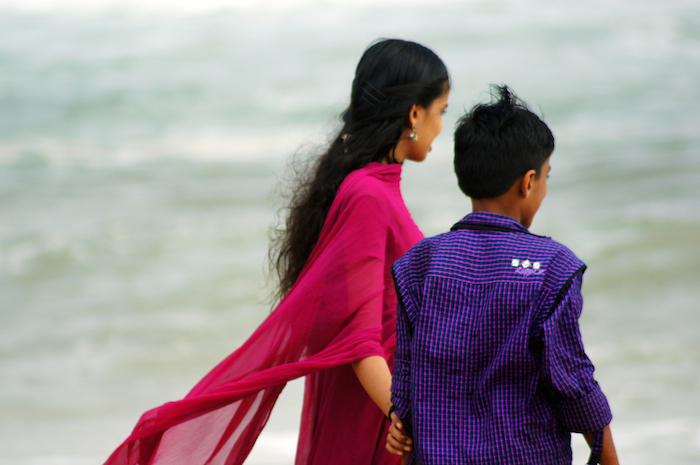 My highlight in Varkala is the “Coffee Temple”, which is run by a guy from London, who unsurprisingly fell in love with Kerala a couple of years ago. Here we find Wifi, fresh juice, real coffee and damn good breakfast. A propos breakfast – a must once you are in Kerala is Keralan breakfast: Puttu. What?! Puttu is rice flour mixed with coconut grain and served with hot milk ansd bananas. All this makes the perfect warming and absolutely filling breakfast. 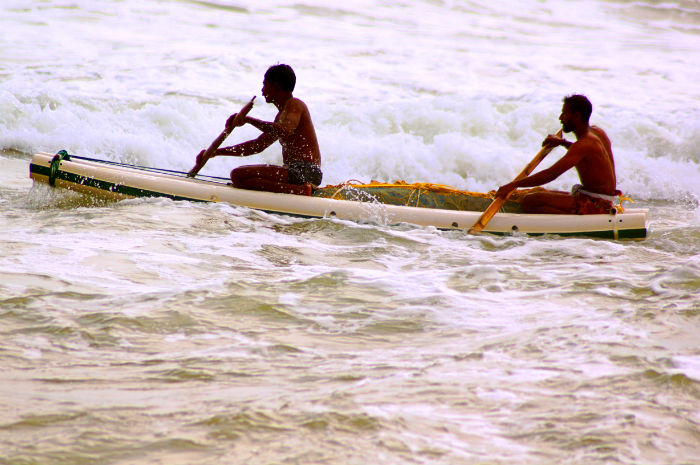 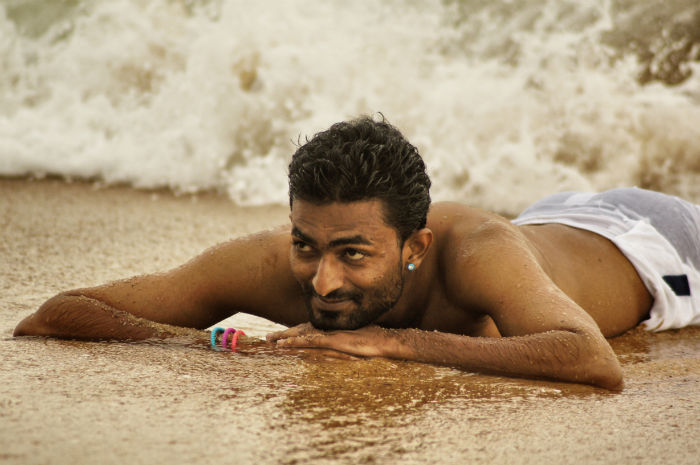 Apart from the amazing breakfast that we celebrate each morning, we also become highly addicted to culinary evening shenanigans. Along the market street of Varkala you will find the freshest fish in India. The offer is pretty much the same from restaurant to restaurant, which is why our mission is: let’s eat our hearts out from the beginning to the end of the street. Well, that’s what we have done and here is our favourite: fresh snapper in banana leaf with chili and naan. Pure heaven.

A trip to Kerala: Backwater tour in Alleppey/Alappuzha

A trip to Kerala can only be perfect if you stay for a couple of hours or even for days on a typical houseboat. Tanned from our time in Varkala we take the train and get to Alleppey. Yes, the train. Despite the fact that everyone warned us all the time to take the train in India, because it is dangerous, dirty and unsafe – we took the train and loved it. But I will explain that in another post. 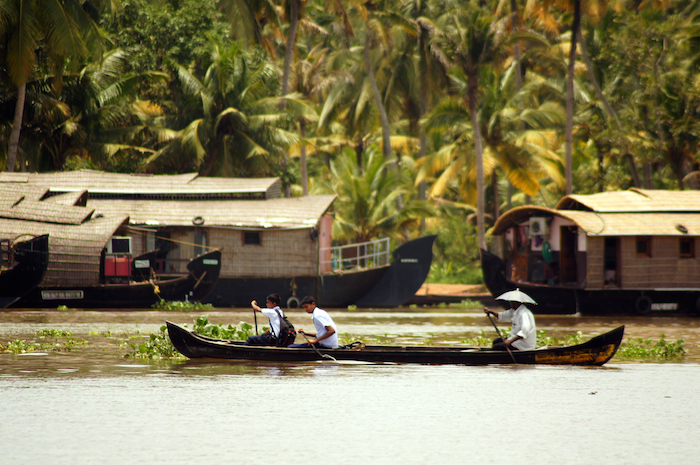 Alleppey is also called Alappuzha, but both names mean exactly the same: a chaotic city that represents the gate to the backwaters of Kerala. From our hotel we took a taxi directly to where the boats leave from. We decided to go on a halfday-tour on one of the princess houseboats. Why princess? Because they all have two very comfortable seats in the very front of the boat where you feel as if you were a princess. As simple as that, as Indian as that. 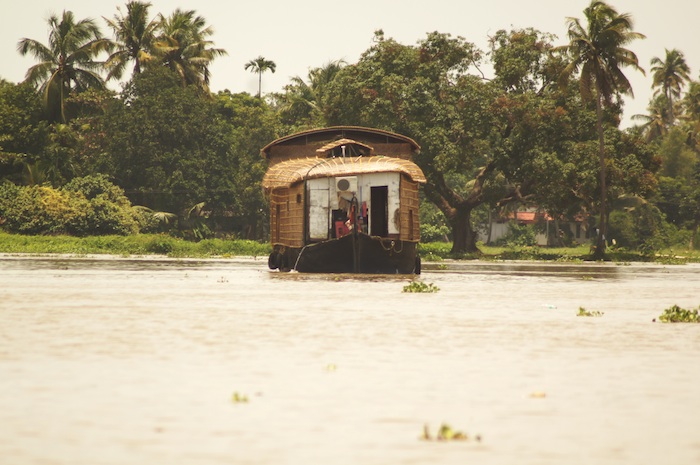 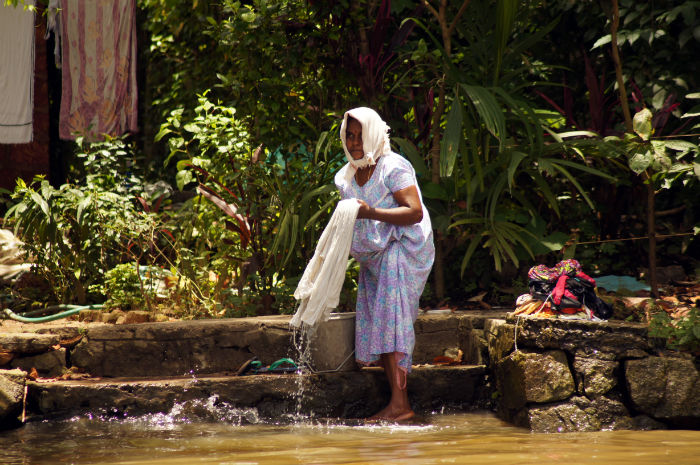 I am absolutely fascinated: on my left and right side I only see palmtrees, water and families that organised their life in the middle of the backwaters. They fish in front of their house, where they wash their dishes too. The schoolbus is a schoolbus here and everything is located around the water. A true dreamlife? Could be. If there wasn’t the brown water, which by far does not look as appealing as the ocean in Kerala. 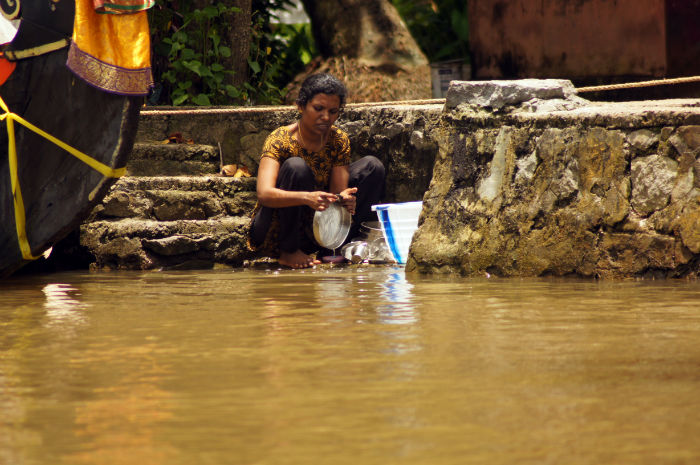 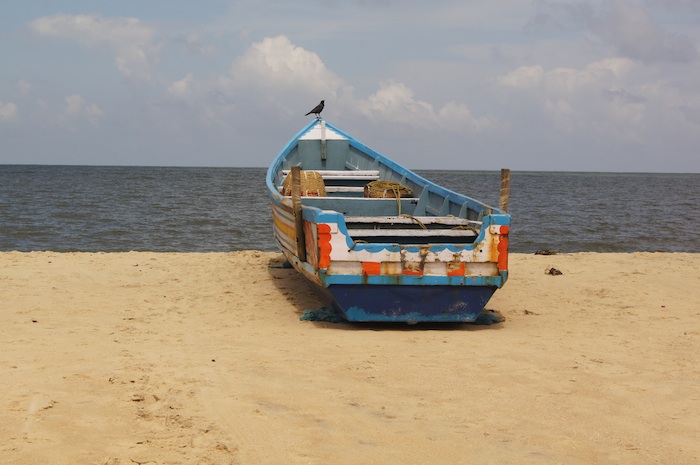 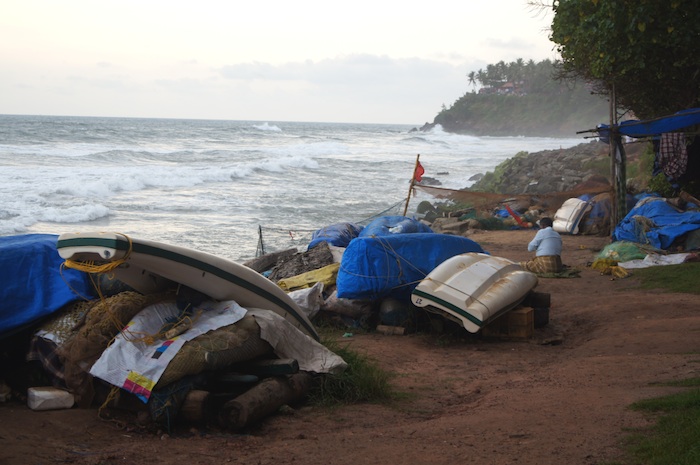 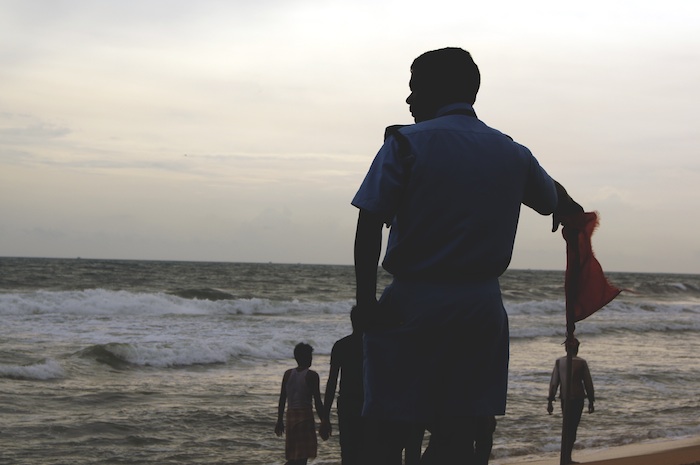 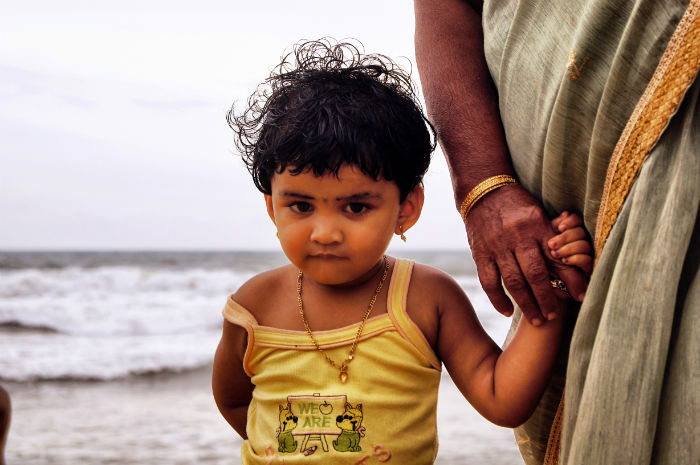 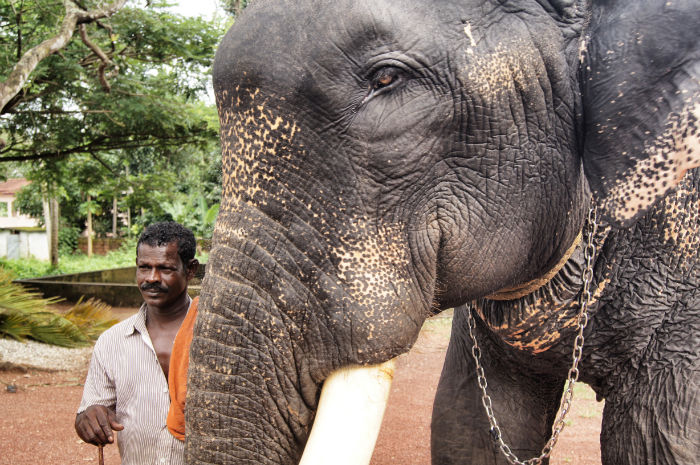 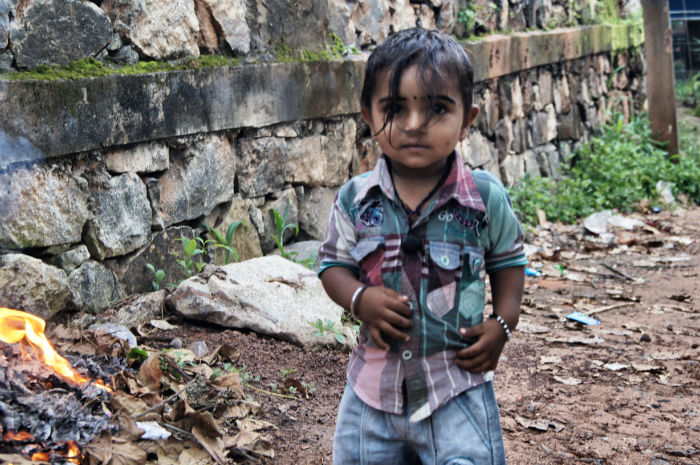 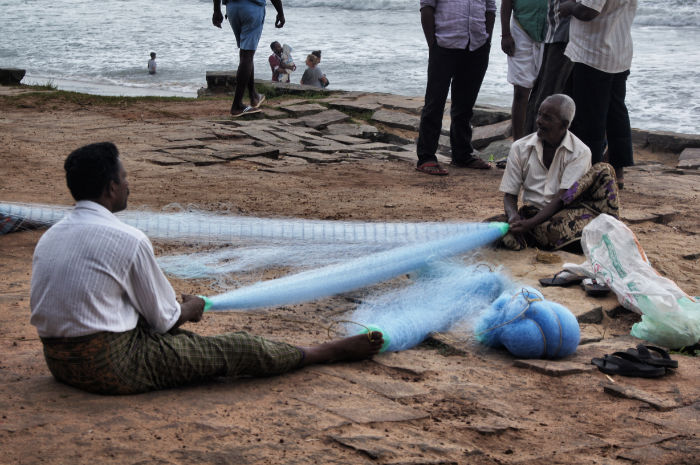 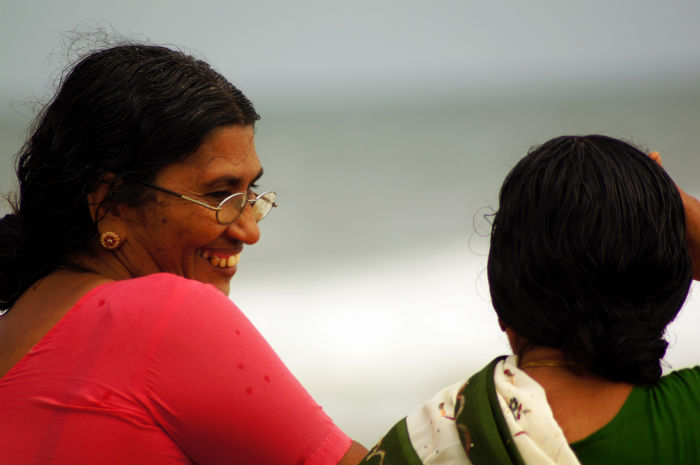 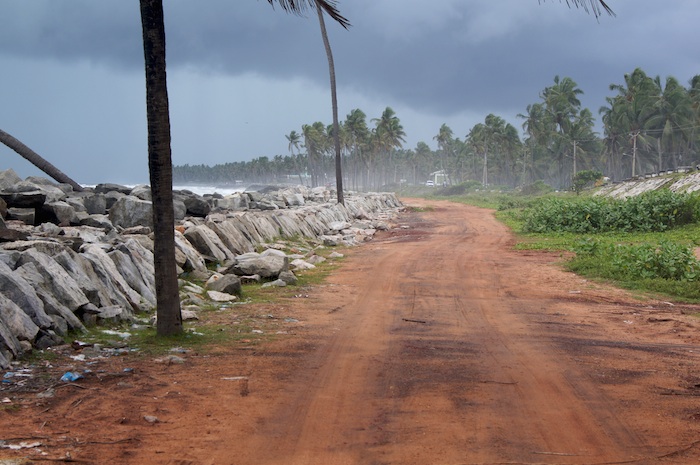