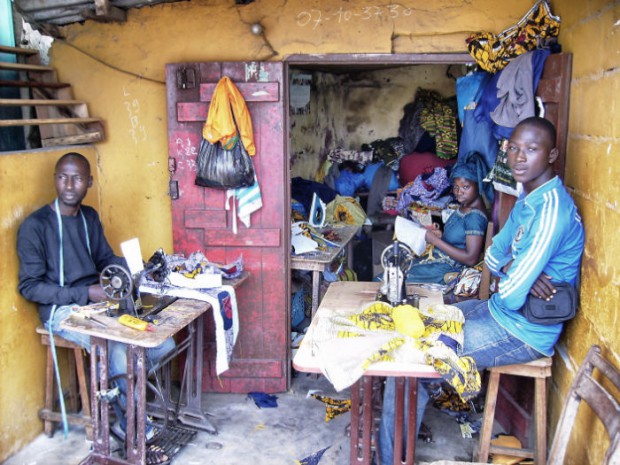 You might have a certain image of Africans sitting on the beach drinking cocoa milk from a coconut and playing drums. Well, this kind of image is not that far fetched from what really happens down here in Grand Bassam. So far I went to three clubs and two bars which are located in the same street. Although a small city of about 70,000 people, Grand Bassam still boasts a whole street of clubs and pubs, or clubs and maquis as they call the latter. Rue de Congo is alive and kicking every night of the week, but on Friday and Saturday the beats are pumping, the drums thumping as people get all dressed up for a night on the tiles, or a dance in the sand. Rue Congo’s largest club is No Limit, one of the biggest clubs in West Africa and the highlight in Grand Bassam. I got quickly used to to Africans dancing in front of many mirrors checking themselves out and even flirting through them. This grand air conditioned club with an explosion of neon and lasers seems to be a bit out of place considering the fact that it is a gianormous red cube surrounded by little maquis (local restaurants) and people selling local food on make shift tables on the street.

No Limit is not that different from European clubs : people are dancing to Beyoncé, the Black Eyed Peas and Sean Paul drinking beer and smoking cigarettes. But, at one point during your night out you feel like being in and experiencing Africa: especially when you start hearing Djembé drum sounds and happy African lyrics. Soon, local people will start running onto the dancefloor shaking their hips to African sounds which will leave no (European) leg untouched. Although the No Limit club seems to have a lot of potential since it is big and very modern it is far too expensive for local people which leads to an empty dancefloor and an oftentimes less pumping atmosphere.

Another, smaller club which is close to No Limit is Underground, owned by two French guys. In this club you really will have a memorable Ivorian night out. Surrounded by mirrors, locals will try to teach you real African dance moves and shakes in the middle of Grand Bassam. In case you wish to listen to some European music you can easily walk into the little DJ booth and he will be delighted to play the music you wish to listen to. Underground is a fun place which gets everyone to dance (and finally to sweat) and which offers drinks affordable by everyone. Other clubs in Grand Bassam are also: Épilogue and Premium.

In case you are not in the mood of going clubbing you could also spend a fun night in bars, such as the Nephty. These bars really seem to have a competition of “Who will be the loudest bar in Grand-Bassam” since Nephty and the adjacent Joker bar have a constant boombox battle with their speakers outdoing each other in decibells. Still you will quickly get used to loud African music as soon as you sit down in relaxing leather chairs enjoying a Castel beer.

Going out clubbing can really be fun in Grand Bassam since the local people seem to be addicted to dancing. Further, African music really gets everybody, even those who do not like dancing, on the dancefloor shaking their hips in front of the mirror.

African music, one of the biggest parts of Ivorian culture, is as complex as the 6 time delayed Presidential election. Not only can you hear Ivorian music in clubs, in taxis and macquis but also hummed by people in the street. It seems as if the music never stops and even a moment of quiteness does not exist since somewhere in Grand Bassam or Abidjan somebody will be singing an African song. Although Ivorian music is based on traditional rhythms such as Djembé, these are most likely being mixed with newer and more popular styles, such as funk, soul, hip hop and even gospel. The most given types of music in Côte d’Ivoire belong to Zougoulu rhythm or traditional reggae sounds and also religious lyrics are existent in a large part of Ivorian songs.

Abidjan on the other hand seems to be a melting pot of different types of music: music from most of the surrounding countries such as Guinea, Burkina, Mali and Cameroon are being played in clubs in Abidjan besides traditional iIvorian music, such as Dioula and Baoulé.
The majority of the rhythms you might hear in Grand-Bassam and other places belongs to the Jazz and Reggae genres. The bands will be mixed, female as well as male singers and instrument players, will get the crowd to dance using trumpets, drums, bass guitar, electric guitar, acoustic guitar, the keyboard and other percussion instruments that will put you in a happy mood. Although there are not many popular musicians coming from Grand Bassam, the Ivory Coast itself does have a lot of talented musicians who are even popular abroad, such as Ismail Isaac, Tiken Jah Fakoly, Alpha Blondie or Gnahouette. In Grand Bassam you will experience a lot of musicians who really have a huge talent although they may just be ordinary people who have never been to a special music school or anything alike.

Putting Côte d’Ivoires music in a more detailed version, Reggae imported from Jamaica, Francophone reggae developed in Côte d’Ivoire, Jazz and Hip Hop need to be clarified. Reggae music is often made up of, as you might remember from music by Bob Marley, very slow constant beat since drums, guitars and the keyboard are all mixed within a constant rhythm that gets everybody dancing. In most Reggae bands the male voice will be accompanied by a female voice and both will mostly sing about peace, ganja, god, fraternity, love and friendship. Reggae music is often used to sing about current topics, as for Côte d’Ivoire you may often hear songs that deal with the revolts up north calling for peace and fraternity. Locals often seem as if they are in trance when they listen to this kind of music. In case they still sit in their chairs they will smoothly bounce their heads, others will run onto the dancefloor jumping around throwing their legs up in the air screaming. The World famous reggae artist Alpha Blondy is Côte d’Ivoire’s best known singer, though his music isn’t necessarily representative as he has fused elements of other music genres into his sound, namely classic rock guitar, jazz, upbeat pop, and progressive rock.

On the other side there is Jazz music. The elements that make jazz distinctive derive primarily from West African musical sources as taken to the North American continent by slaves, who partially preserved them against all odds in the plantation culture of the American South. These elements are not precisely identifiable because they were not documented—at least not until the mid- to late 19th century, and then only sparsely. Furthermore, black slaves came from diverse West African tribal cultures with distinct musical traditions as mentioned above. A famous band from Congo which is often associated with African Jazz is Grand Kalle and l’African Jazz.

Hip Hop has been popular in Côte d’Ivoire since the mid 1990s and is presented in a form of gangsta-rap-influenced style called rap dogba. Modern gangsta hiphop does not have as large a following as it does in neighbouring Anglophone Ghana. The West Coast beats of Dr. Dre, 50 Cent, Eminem, Lloyd Banks etc. are heard, but this culture is rather peripheral. East Coast sounds from the US are hardly heard here, likely due to the preference for French language music or a definite clear catchy beat.

Further it has to be considered that there are more than sixty different ethnic groups in Côte d’Ivoire which all have their own different folk musics. The traditional music often shows a strong level of vocal polyphony which can be seen in Baoulé music. Baoulé are Akan people who represent the largest ethnic group in the Ivory Coast. They are farmers from the southwest of Côte d’Ivoire. Further, ‘talking drums’ are given frequently. The talking drum is the oldest instrument used by West Africans. These drums can be regulated to an extent that it is said the drum ‘talks’, and are found especially among the Appollo, who are also known for their Abissa purification dance. Polyrhythm, another African characteristic, is found throughout Côte d’Ivoire and is especially common in the southwest.In addition to that CI also has Zoblazo music, of which Meiway is the most sold artist. This kind of music originates from Abidjan and was first created in the early 1990s. It is a cosmopolitan popular dance music with simple up-tempo rhythm and high tech instrumentation and contains a mixture of traditional dance rhythms from southern Cote D’Ivoire.

Zouglou is another traditional form of Ivorian music. The modern production that you hear in the clubs was developed in the early 1990s when university students, upset about living conditions on campus, began complaining about problems within society in local languages and french street slang. Zouglou rhythms have an ancient origin, what is heard contemporarily is an electronic studio version of old folk rythms.

As last, another type of music from the Ivory Coast, Coupé-Décalé can be named. This type of music is popular dance music and draws heavily from Zouglou and Congolese rhythms, Coupé-Décalé is a very percussive style featuring African samples, deep bass, and repetitive, minimalist arrangements

Talking about popular music, Gbégbé, a Bété rhythm, has been a part of it since Côte d’Ivoire’s independence, popularised by Sœurs Comöé and later, Frères Djatys and Sery Simplice. Ernesto Djédjé is considered the father of Ivorian popular music. He can be seen as an advocate, if Ivorian music, railing against the “Congolisation” of the Abidjan scene and plays a type of music called ziglibithy. The Ivorians are greatly touched and moved by their music. Because of their joy and passion for their local sounds you will hear music everywhere.