“One rat please” – Ivorian cuisine and the Maquis adventure 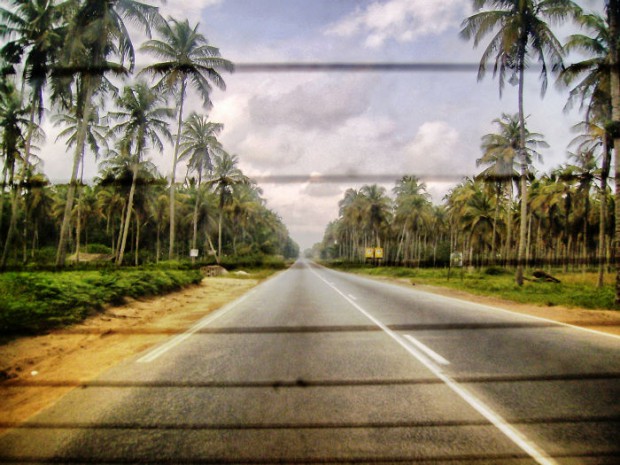 How to get the best food in Côte d’Ivoire? Do not even dare to go into high class restaurants if Maquis are in every street. Maquis are popular West African restaurants which first began in the early 1950s and belong to the Ivory Coast’s informal sector. On the whole, it was all about selling “viande de brousse” (bush-meat), such as “Agouti” which is a big bush rat and local alcohol such as gin. Over time these restaurants really became the source of good food and developed their own specialities which compete with the high-class restaurants.

You mostly find Maquis in the street where people can sit down, have a drink, watch TV, or listen to local music. These restaurants are strongly integrated into West African culture, all offering a variety of traditional African dishes and drinks at a reasonable price. Originally these Maquis were based around the idea of exchanging ideas on how to best cook ‘agouti’ rat.

Like a community hub maquis, like pubs in Europe, bring people together and are a favored spot for family gatherings. The women administering these little cantines earn additional money to increase the family’s budget. Maquis are administered in a traditional way handing over leadership from generation to generation. Recession from the late 1980s, which ended the Ivorian miracle, also increased the success of Maquis enormously with people having less disposible income and having to choose cheaper options. Today Maquis represent a place of fun, good prices, tasty food and a hell of a lot Ivorian gossip and good times.

Today you find every type of person eating and drinking at Maquis, ranging from the ordinary worker to real businesspeople all suited up. Often housed under a bamboo roof maquis offer a variety of meals. Either rice, attieké (similar to couscous), fufu (a thick paste consisting of ripe plantain and yams) are served as accompagnements to three or four different types of sauce: aubergine, or peanut sauce, sauce graine(a hot sauce made of palm oil), or sauce djoumgbré/sauce gombo (with a base of Okra) all topped with either ‘poulet’ (chicken) or ‘poisson’ (fish). Be careful, since most of the dishes are cooked with firey spices, visitors not used to chillipeppar will be left open-mouthed after biting into one.

Another national dish found on almost every street is alloco. This is a dish prepared with ripe plantain bananas. The plantain is fried in a pot of palm oil and chilli. Served with spices it will again lead to sweaty foreheads and a running nose.

Beyond simple maquis, a common feature of street corners is the more humble kiosk. Kiosks are a simple and quick place to fill up. There customers can cheaply enjoy spaghetti with tomato sauce, eggs or even the locals’ favorite pasta accompagnment – kidney. In these informal spots, many people take a quick coffee or just a simple ‘baguette avec omelette’ at a low cost.

Taking a look on the streets surrounded by foodstalls you will remark that vegetarians might have a tough time in Côte d’Ivoire since people seem to be crazy about chicken, fish or other meats, unless you might be lucky enough to find a ‘salad lady’. Fresh salads are not typical, but dotted around larger villages and towns such as Bassam, which hosts a few salad stalls selling salads made of avocados, lettuce, tomatoes (but tiny bits, as they are out of season and expensive right now), cucumbers, potatoes and surprise, surprise: chicken. Also, did you know that Ivorian ‘dressing’ is made out of Maggi? Yes, Maggi. Put a cube of Maggi in water and oil and mix it. Done. Oh and when visiting a salad lady you might want to disregard the ‘peel it, cook it or leave it’ appeal. This is not working. Sorry.

In case you feel extremely hungry (a rare feeling in Africa due to the big portions),it’s best to go out when it’s getting dark and order delicious local food at local foodstalls or maquis and enjoy the food with a cool beer, Castel or Flag, eating with your (right) hand while listening to African music. The maquis atmosphere is relaxed and fun, but so is the attitude of the staff there – be prepared for a long chat at your table while you wait for the food to arrive. Maquis are a lot slow in serving food compared to European restaurants, so you might consider taking their number, calling them before to order your personal food. Bon appetit!