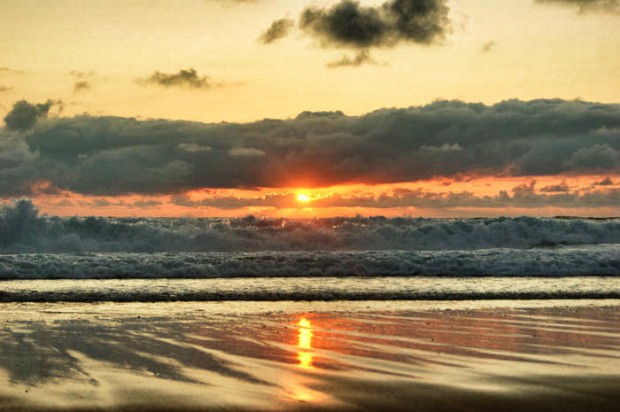 2013 was one of the most exciting years I have ever had. I lived in three different countries and reached my own little travel limits once in a while. Still: I travelled to 11 countries and went to 41 cities around the globe. From Fiji, through New Zealand and Australia to Cuba – I pretty much crossed the globe in 2013 – unbelievable. I still cannot believe it and loved every single second of it.

The night from the 16th to 17th March I slept on Andrew’s sailing boat in the middle of the Whitsunday Islands on Australia’s East coast. Andrew was one of the nice people who I met on Couchsurfing and who hosted me on my East coast trip. After he picked me up with pizza, beer and his rubber boat on the beach of Airlie Beach, the sunrise, viewed from his own boat, made this to one of the best Couchsurfing experiences I had this year, plus the best sunrise!

Speaking of Couchsurfing… I ended up in a massive villa in Surfers Paradise. The owner? Peter – 56 years old and properly in life, especially considering his lifestyle and alcohol consumption. I know, sometimes people just want to make you feel really comfortable and provide you with the best things you can possible have. But… cocktails made of champagne and schnapps combined with watermelon shots clearly kill me. I now learned that sometimes it is not even bad to live in a colder country. Hangovers in warm countries, where you carry around your backpack are a pain.

3. The best way to sleep

I have probably never been a big fan of camping until this on night in the middle of nowhere between Ayers Rock and desert came. Thanks to Adventure Tours I ended up in a Swag – a mix of fully-body-tent and sleeping bag put on red sand of Australia’s outback. Stars above me, bonfire in front of me and potentially the one or the other Dingo around me. You better put that on your list!

With a good friend from Germany I travelled from Adelaide to Melbourne. Our beautiful Wicked Camper was the perfect companion on the Great Ocean Road until we ended up in Lorne – a cute, little village right on the ocean. Since our camper did not have a shower, McDonald’s became our daily hygiene spot (or so). Lorne, however, was where we actually needed a shower but where the camping was way too expensive. So we sat there and waited. And there it was: two guys knocking on our van door, it was dark outside and around 9-ish. They needed a lift for them and their 12 pizzas and we got a bottle of wine, a shower in the morning, a party night in the local pub and a kick-start for our van, which gave up the next day.

I booked an island trip and got dolphins, not kidding. The very North of New Zealand offers the best islands and trips. I booked one of these and ended up in a short wetsuit, swimming after a million dolphins while being vocally pushed by the crew and passengers on the boat.

So I went to New Zealand, the furthest you can potentially go from good old Germany and was ready to hit the adventure travels scene of the Hobbit land. I booked skydiving and what happened? Earthquake. Thunderstorms. Rain. Here is what I have learned: the more you wait and think about potential consequences of your behaviour and activities (something I rarely do), the lower is the chance of you actually doing it. No skydive for me but at least some shakes from the earthquake. Hooray.

7. The most dreamed of weekend

I worked for a surf camp and I surf. Well, I at least try it. So, how many girls (and boys) out there dream about meeting the big heroes of the waves? How you get there? Get yourself a press pass and go to the Rip Curl Pro competition on Bells Beach, located close to Melbourne in Australia. My picture with Kelly Slater definitely belongs to the Top 10 of my 2013.

A French-Dutch friend (she doesn’t really know) and me travelled to Fiji in June 2013 – a week of an island trip around paradise ahead of us. The last day ended with a visit in the local and natural spa, close to Nadi, Fiji’s capital. We covered out skin with black pudding coming out of a hole full of mud (felt like hot cow poo) and then went to 37° warm water of the natural source. Awesome!

My big Australia-New Zealand-Fiji trip ended in, of course, Bali. Together with three friends of mine I went to Nusa Lembongan, an island closely located to Bali. We booked a snorkelling trip, which ended on a little fisher boat, with Bintang (Indonesian beer) and the best dinner you could have: right before sunset we anchored in the open sea and waited for our delivery. Fresh fish was delivered to our boat while we watched the sunset and listened to the ocean – heaven?

In the beginning of 2013 I went from Cologne to Aarhus (Denmark) and took the night train, where I met the most amazing people with stunning stories: Ethiopian and Somalian refugees on their way to peace and a better life. In the middle of the night, around 3, the police ‘stormed’ the train and asked for identity cards of the African passengers. Scary and fascinating at the same time.