Fiji – the country of never not laughing people 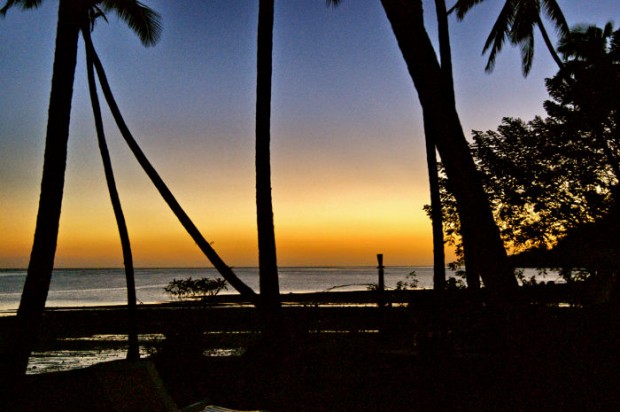 Along with the Feejee Experience I spent an incredible 10 days on the island of Viti Luva in beautiful Fiji. Viti Luva is the main island in Fiji, not only because it hosts the capital Suva, but also because the Nadi International Airport is located here. When you think about times in Fiji, pictures of incredible beaches, crystal clear water and palm trees jump into the head. Well, that’s true. The paradise on earth, no doubt.

Nadi – the center, but not the capital of Fiji. A city that is not more than a main road with various small shops lined up on the right and left. Thanks to the British colonization from 1871 to 1970, 40% of the current population of Fiji comes originally from India; migrant workers, who were brought to Fiji by the United Kingdom for sugarcane cultivation. This not only leads to mixed images in the streets, but rather to an incredible range of different curries and other Indian delicacies. The Sitar restaurant in Nadi is a definite hotspot for Indian specialties!

Natadola Bay – a beach that is supposedly to be under the top 10 beaches in the world and well it does really belong in there. Through a bumpy road, we went straight to the Bay: blue sea, white sand and only few tourists. With a fresh coconut in our hands, life was pretty damn good. For lunch, we had an authentic BBQ under the palm trees and then  went towards sand dune where we surfed down on bodyboards in a more or less elegant manner. We spent the night at Mango Bay Resort, another fascinating beach with hammocks and the general Pacific flair. In the evening we had Pacific dances: a little hula here and wobbling there left the one or the other European mouth open.

Fiji’s jungle – on our third day we went to the jungle. You have to remember that mass tourism is far away from Fiji. This means that tourism is given and that it still represents the largest source of revenue, but it’s still very, indigenous. A jungle trek, hence, is more or less a combination of mud slides and plenty of fun crossing rivers. However, the scenery was incredible and the (small) jump into the waterfall made this trip perfect. Indigenous Fijians love music, singing, and all the trimmings. During the two-hour trek through the jungle, we were thus accompanied by chants of the natives. While, the tourists were sweating hard, the locals were singing joyfully and ran barefoot through the jungle.

Palm Beach – after the first few days we landed in the most amazing resort in the journey, the “Uprising Resort” at Palm Beach on the south coast of Fiji. What can I say? What does one do in such a place? It begins with a breakfast with sea views, continues with lying down on the beach, go swimming and finishes back on the beach.

Yanuca Island – After a full day at the beach we felt like exercise and took the boat to Yanuca Iceland. The island was about an hour from Palm Beach and kidnapped us into the final paradise. On the island itself you find one single village. The people there live off the things that are on and around the island: coconuts, fish, spinach, cassava and a few chickens that once found there way into paradise. This island offers everything one imagines in a paradise: the typical palm tree that is bent over the sea, the hammocks between palm trees, coral reefs ready for snorkelling discovery and the usual crystal clear water. Definitely worth a visit!

The indigenous Fijian side – 30% of the approximately 1,000,000 people who represent inhabitants in Fiji, live below the poverty line. However, I did not feel that poverty is a big issue within the population. Fiji and its people have, in my eyes, found a good way to live with what they have and thus can live really well off their resources. Nevertheless, it is precisely the education and the public transport system that brings great disadvantages to the population. On our sixth day we visited a real native village and a village school. Due to the lack of public transport, some school children are walking more than two hours to reach school every single day and barely  have the money to pay for their school uniform. The day among the locals showed me once again how incredibly spoiled Europeans are. The people in Fiji never stop laughing. They welcome everyone with open arms and give what they have, or do not have. Shouldn’t this be the case all over the world? On this day I had some bog muscle aches. Not from running but from the permanent grin that was on my face. Observing locals locals, singing and dancing and being part of the biggest hospitality ever opened my eyes. Perhaps we should now and then just think once more about whether the situation in which we currently are really is as bad as it feels. For my situation, I can say with certainty that I admire the people of Fiji and their seemingly easy way of coping with the daily problems they have to cope with. Bula!

Fiji, the land of soft corals – In Voli Voli, Northern Fiji, I went diving for a second time. The Fijians, with their incredible composure are not big fans of licenses and certificates. Without a proper diving license I dived down to 15m and felt alone in one or the other coral-hole. Fiji is known as the paradise of soft corals. Underwater you forget the stressful life afloat. A feeling that is not possible to explain.

All good things come to end – the end of our Fiji trip could not have been any better. From the North of the island we went back to Nadi, where we endulged ourselves in natural mudbaths and hot springs. Whereas people around the world pay hundreds of thousands of dollars, you can simply jump in on Fiji’s natural beauty spa once in a while, for free. Due to sulphite deposits the hot springs heat up to 70 degrees.

Fiji is definitely a country that enchants you. It is the incredible hospitality of the people and their laughter, which gives every individual tourists the feeling to be at home. There are also some rituals that simply are incredible fun. Kava, a drink, which is obtained from the pepper root, is a story in itself. Along with several other people, you sit around the kava bowl. The Kava powder is being squeezed in a soft cloth and thus the brown broth is slowly poured into a small coconut shells. Before one is drinking the brown something, a loud Bula! Needs to be called out (Hi / Cheers / health), then clap and down it. Kava is not a luxury drink. Kava is not of special taste either, but it the meaning behind it which makes it special. Fiji is a fixed destination within my world-wide top ten and simply everyone out there should travel down to the potentially happiest people in the world!

Looking for the perfect preparation for a trip to Fiji? Check out the Fiji travel guide on Travellers Archive.