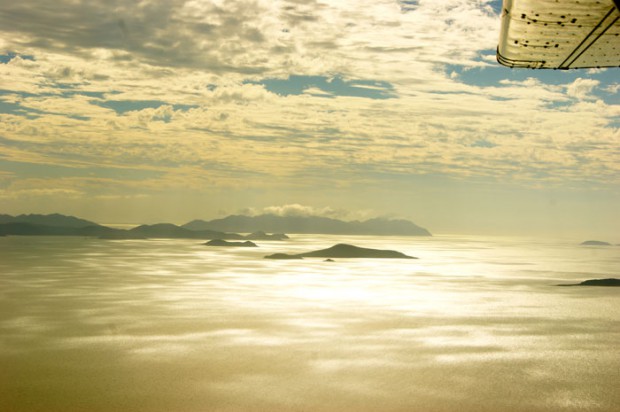 After a 14 hour drive from Cairns to Airlie Beach, I arrived in the sleepy village by the sea around 11:20. The first impression? One single road, lined with small shops, bars, pubs, clubs and travel agencies, hostels behind it, nothing more. And then, suddenly, you turn around and check the view of the sea: bright blue water, islands in the distance and the beautiful hilly landscape on the right and left side. There is no real beach-beach in Airlie Beach, but a lagoon, located on the beach, which certainly offers some good refreshment in the tropical heat.

I used the first day to do something that I would have probably never indulged myself with. Thanks to the lady at Backpackers World Travel I could enjoy an one-hour flight over the Whitsunday Islands and  the Great Barrier Reef! I was picked up at the venue on time and went to the tiny airport in Airlie Beach.

Shortly after a bit of waiting, me and three Canadian couples jumped on the little plane. Because I’m cool, I was allowed to sit up front. Just kidding… As a single traveller you simply cannot be part of romantic times in the back of the plane, but rather take over some entertainment duties in the front of the plane (that sounds like something it should not sound like).

After a short safety briefing and the run over the bumpy field, we went up in the air and found ourselves directly above the sea. This feeling of flying over turquoise-coloured water is surreal. The scenery was incredibly impressive and thanks to the very good weather I could see the Great Barrier Reef and the individual coral shapes even from a few meters in height.

Definitely recommendable, especially after having flown over the famous Heart Reef …

Through CouchSurfing I found the most unusual accommodation ever: a host who offered a couch on a sailboat for a night in Airlie Beach. My host Andrew picked me up from the beach around 5:30, and so we took his rubber dinghy out into the water. His sailing boat was, of course, not in the harbor, but far, far out on anchor in the open sea. Pizza, beer and a breathtaking sunset made this Couchsurfing experience something very special.

On the second day I went on the Northern Ocean rafting trip. At the port of Airlie Beach three relatively large, motorized dinghy boats were waiting for a huge crowd of backpackers. Stinger Suits against the painful jellyfish are directly available upon check-in and cost around 7 €, unless you can show your student card.

After snorkeling we went towards Whitehaven Beach. After a small bush tour we reached the lookout at Hill Inlet, which commanded a magnificent view over the landscape of Whitehaven Beach. Whitehaven Beach is, they say, the whitest beach in the world and not only that .. Through different water currents colors blend together and a mix of green, brown, turquoise and white colour will certainly leave many mouth open – incredible!

In the end, could you ask for anything else, we enjoyed lunch directly on Whitehaven Beach. Seafood, chicken and salads were served which certainly had to be properly protected from the greedy seagulls.

Completely stuffed, happy and slightly sunburned, of not, even tipsy, we reached Airlie Beach in the late afternoon – Definitely a MUST-DO!

4
Every good-bye is a new hello.
Fiji - the country of never not laughing people