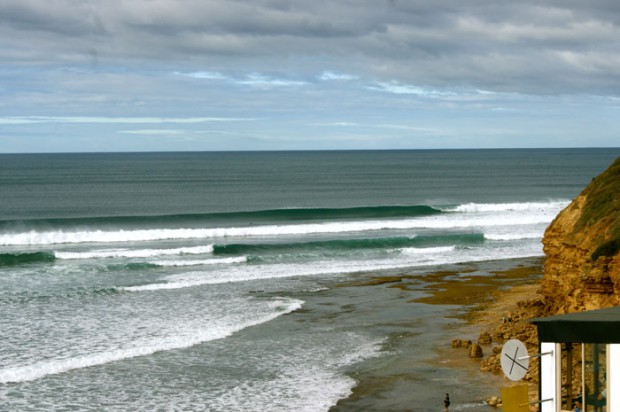 Last weekend I had the honor to go to this year’s Rip Curl Pro in Melbourne, on a press pass! Only problem: Melbourne is about 2 hours away from the actual event location. So how the eff do I get from Melbourne to Bells Beach?

After searching through the Internet I pre-booked a return ticket via ‘Gull Airport Service‘ , a small business, which offers direct connections from Melbourne Airport to Geelong. Geelong? What? Geelong is a small town that lies in close proximity to Bells Beach. So a perfect location to quickly and especially early get to Bells Beach. Victoria, the state in which Melbourne, Geelong and Bells Beach are located, is located in the South of Australia and the difference to big and busy Sydney is tremendous!

Having landed on Melbourne airport I directly hopped on Gull’s tiny bus to Geelong. Tickets, back and forth, can be bought online for $ 55, a bargain when you consider that only one ticket from the airport to Melbourne City and back costs $ 27. Within an hour, I drove to Geelong and arrived in a completely empty city. Honestly, where were the people? To date, only the Easter weekend is a considerable explanation, but even my nice CouchSurfing hosts did not know what was going on.

I gladly found a nice accommodation through Couchsurfing and was therefore not completely alone and stuck in this town.

The MUSTS in Geelong

Well … Geelong has a nice promenade by the harbor, which looks especially nice in the dark. Within the two days I was in Geelong, we tested two bars. Firstly, it is worth to go to ‘Opium’, a small and cute cocktail bar. Secondly, there’s ‘Beavs’. A relatively large but cozy bar with large couches and chairs and a giant screen, which is perfect for ‘Aussie Rules’, a game that I cannot explain, except for: a lot of men running around in an oval trying to get a ball shot between two long rods.

Otherwise Geelong is certainly a good place to just get away from the big city life. However, there is not a lot going on.

The paradise of Bells Beach

On Saturday morning I then went to Bells Beach: a beach on the Southern coast of Australia, which could not be more fantastic. A free shuttle bus brought surfers in the morning, over hill and dale and passing wild kangaroos, to the dream of all wave lovers. Bells Beach offers incredibly long and consistent waves in a stunning atmosphere, between rocks, cliff, forest and framed within the Great Ocean Road.

Well, and I must admit a Press Pass definitely has its advantages: quickly passing the entrance to the Press-/VIP-area I was welcomed with a sweater, T-shirt and beanie and also surrounded by incredibly talented surf reporters, who sat like zombies staring at the live broadcast from the sea. It took a bit until I understood where I was.

The final transition to the beach and the sea made me realize then: Anne, you’re at Bells Beach and you are watching the world’s elite surfers who ride anywhere else in paradise on the other side of the world waves but never really close to you. But wait a second, paradise? Oh yes, I’m here. In paradise.

The two days flew by and one highlight followed another. It was not only the photo with Kelly Slater, or the outburst of John Florence, who brought me to smile, but much much more of this incredible weekend! Easter could not have been better 😉