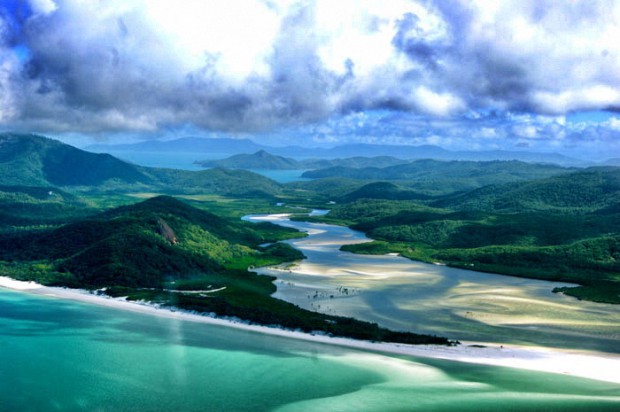 You might think I am crazy, but what else should I do, when being punished with an intense time limit of three weeks and an even more intense will of travelling through Australia? There is probably a lot of people out there who always wanted to travel through Australia, but never had the sufficient time or money to actually realise plans. Well, I tried it, although I am in the exact same situation: little time and even more little money. With this basis I flew from Sydney to Cairns, following my target of travelling Australia’s East coast within 15 days.

In order to get from Sydney to Cairns I booked a plane ticket with Virgin Airlines about one month in advance. For 130€ only I could carry my big backpack of 23kg and fly from Sydney to Cairns within three hours. On board there is no food, so you should better bring your own lunch to avoid extreme costs for food on the plane. The securities at the airport should be fine with you carrying a little lunchbox with you. Also, another advice: instead of paying 12AU$ for the Airport shuttle which takes you from Sydney central station to the airport withing 15 minutes, you should rather take the public bus 400, which leaves from Bondi Junction and only costs 4,60AU$. Keep in mind, that it will take an hour to get to the airport on this bus.

My plan was to see the East coast, and here is how I realised it: I booked a MiniTraveller bus ticket with Greyhound. This ticket enables you to travel from A (Cairns) to B (Sydney) and also gives you see opportunity to hop on and off as much as you like as long as it is within the same direction. Also, if you are a student, you should better buy an ISIC (International Student Identity Card), which gives you another discount on hostel bookings and the bus ticket. For 280€ only I could, thus, travel from Cairns to Sydney following the self-organised route: Cairns – Airlie Beach – Hervey Bay – Brisbane – Surfers Paradise – Byron Bay – Sydney.

Apart from hostels there is another better and much cheaper alternative to sleep in Australia: Couchsurfing. Before doing this trip I rarely had any experiences in Couchsurfing, but simply tried it and it worked out completely fine and even better than expected. Here is my advice: work on your profile on Couchsurfing, check the profile of your potential host before sending a request and plan ahead in order to avoid a night on a comfy park bench.

I started two weeks in advance and contacted a few people on Couchsurfing. This is how I managed to surf on five couches in five different places. Thus, I only paid for one night in a hostel in Hervey Bay.

And this is where it begins… The East coast is full of amazing landscapes, stunning beaches and incredible islands. This is the reason for which I advice all of you to plan ahead the trips you want to do and when you want to do them.

I booked the following trips:

Indeed, you do need some food, right? Well, the good thing about this trip and about the fact that you will couchsurf and go on trips is a) that most trips include lunch/dinner and b) that most hosts on couchsurfing are fine with offering you food for one to two days. This will not only save you some money but further will give you the opportunity to (maybe) experience a real Aussi-BBQ.

Apart from food there is still other costs, such as phone, souvenirs or the one and the other beer. I calculated around 10AU$ to be spent per day. However, this did not exactly work out, which is why I would advice 10-15AU$ per day in order to not starve and still have a beer once in a while J

The upcoming posts will feature reviews of trips I made and cities/villages I visited.